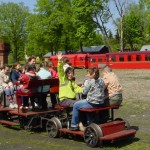 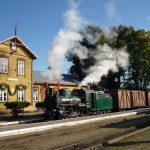 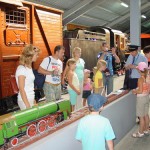 Narrow Gauge Railway complex in Anyksciai is a technical, architectural and historic monument which preserved the spirit of the 20 th century. It consists of one hundred-year-old restored railway station buildings, the narrow-gauge rails, railway beds, water plumbing system, a stone-paved square, 96 meter-long riveted steel railway bridge across the River Sventoji.

Since 1998 the Museum staff was looking for exhibits: equipment, photographs, documents. They were brought from various sections of railway. When in 2000 the carriages were taken away to the scrap metal, some kinds of rolling- stock were left: a roofed cargo carriage, a platform, a tank-car, a roofed carriage (ice-car), a steam engine. A very important accent became a narrow railway engine “Kukushka”, which was given as a gift from a businessman Jozef Fiedorovicz. As the exposition was becoming more extensive, it became the most important cultural fact in Anyksciai and was rewarded a premium, established by Anyksciai municipality.

In 2002-2003 the Museum accomplished the project “Reconstruction of the Narrow Gauge Railway Museum” . The rolling stock was preserved and rebuilt, the shelter for protection was made, some railcars and carriages for entertainment were obtained, the surrounding is being tidied. The Narrow Gauge Railway Museum is becoming more popular. About 10 000 tourists have visited the expositions, ridden a rail cycle, driven a manual railcar since the first days of the museum. All activities are attached to preserving the narrow railway and making it popular. 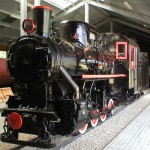 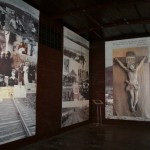 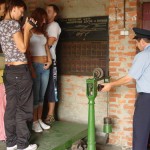 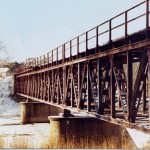 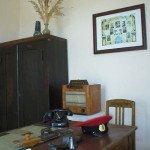 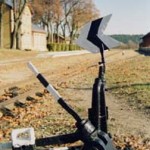