Granary of a lithuanian poet and bishop Antanas Baranauskas 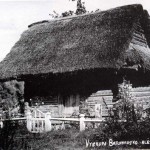 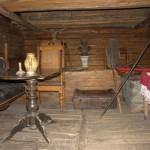 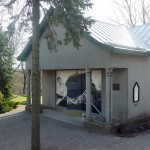 The Granary of Antanas Baranauskas (1835–1902) is one of the most interesting ethnographical and literary monuments in Anyksciai and the first memorial museum in Lithuania.

The Granary was built in the town historical place Jurzdikas by the poet’s father Jonas Baranauskas. It was very simple, built with the help of an axe, without a saw and nails. It was knocked up with oaken pegs. The date is cut above the door. So according to it the Granary was built in 1826. In 1839 when the future poet was 5 years old, his father bought some land in Azupieciai and moved from Jurzdikas taking the Granary with him. At first it was used for storing flax, better clothes, agricultural implements. Today you can see corn-bins, where corn was poured.

When A. Baranauskas came for a holiday he used to stay in the Granary, where he could read and have a rest. In summers of 1858–1859 he created his famous poem “The Forest of Anyksciai”. A leathern trunk reminds of the rebellion too. It was bought in Petersburg. A. Baranauskas took it when he went to study to Munich and kept manuscripts in it. Only some cutlery with the monogram of A. Baranauskas is left from Seinai period (1897–1902).

In 1921 the land of the Baranauskai family was bequeathed to Antanas Zukauskas-Vienuolis, who was Baranauskas’ relative (A. Baranauskas – A. Vienuolis grandfather’s brother). In 1925 the writer started to build a house there, to organize the museum and collect exhibits. The first exhibits are left till now: a bed made by Baranauskas’ father, a shelf and a little table. The furniture brought from Kaunas in 1897 by the poet’s brother Jonas was put into the Granary.

November 26, 1927 was the 25th anniversary of A.Baranauskas’ death. A.Vienuolis was preliminary preparing for this date. On May 1 he took a notebook and wrote “Visitors’ Book” on it. So it was the date when the Museum was founded.

A. Vienuolis took care of the Granary. It was very important to preserve it from the weather changes. So in 1957 a precautionary convex house was started to be built (architect J.Kvasys) and was finished in 1958 after Vienuolis’ death. 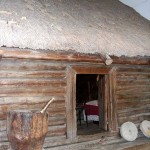 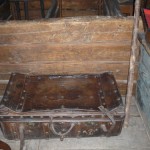 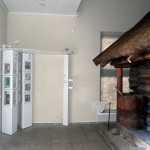